Shasta
2B: McKenzie Carnes
3B: none
HR: none
Monterey Peninsula
2B: none
3B: Alexia Torculas
HR: none
full stats

Shasta
2B: none
3B: none
HR: none
Cosumnes River
2B: Danielle Pfennig; Mckinzie Spriggs 2; Becky Pedersen
3B: none
HR: Sydney Giovannoni
full stats

Shasta
2B: none
3B: none
HR: none
Cosumnes River
2B: Audrey Brookins
3B: Danielle Pfennig
HR: none
full stats 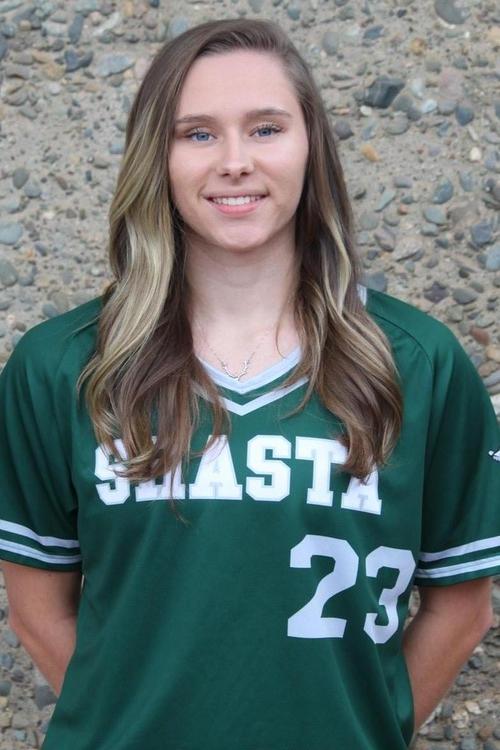 REDDING, Calif. – The Shasta College softball team opened the season with a loss in all four games at the Monterey Peninsula Classic over the weekend.

Monterey 12, Shasta 0 – 5 innings
The Knights only had three hits in the game, one each from Tia Vonderharr, Brooke Blades and Autumn Giannini. Shasta gave up eight runs in the second. Kyndall Holleman was the losing pitcher, giving up one home run, walking three and allowing 12 runs on 13 hits in four innings.

Monterey 8, Shasta 0 – 5 innings
Shasta gave up five runs in the first and only managed one hit in the game to suffer the loss. McKenzie Carnes was 1-for-2 while Veronica Schlapia walked twice. Blades took the defeat in the circle, allowing eight runs – five earned – on eight hits in four innings while striking out one and walking five.

Cosumnes River 7, Shasta 4
Eight Knights racked up 11 hits in the game. Holleman was 2-for-2 with an RBI, Tia Vonderharr was 2-for-4 with an RBI, Dakota Smalls was 2-for-4 and Madeline Nightingale and Calley Rupert each had a hit and scored a run. Sophia Valdez was 1-for-3 with an RBI. Holleman took the loss, allowing six earned runs on 11 hits in a complete-game.

Cosumnes River 15, Shasta 2 – 5 innings
The Knights had one hit on Vonderharr's RBI single in the second. Both Smalls and Nightingale scored a run. Blades gave up 15 runs – seven earned – on 12 hits with five walks and no strikeouts to take the loss.

Shasta is 0-4 and has six games this week, two at Mendocino, two at Folsom Lake College and two at Solano College.